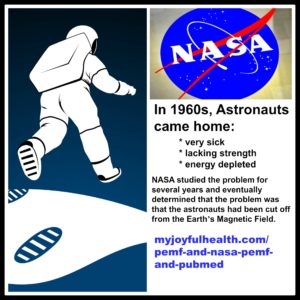 PEMF AND NASA ~ Pulsed Electro-Magnetic Fields and National Aeronautics and Space Administration After the launch of the first humans into orbit, it became obvious that human (and animal) bodies cannot be separated from Earth’s magnetic field, without dire consequences. PEMF and NASA ~ After approximately one hour in orbit, U.S. and Russian astronauts began to […]

It Shouldn’t Be This Hard to Be Joyful…

Join our PEMF Joyful Health newsletter and you'll get instant access to a lot more valuable information created exclusively for you!